Finding contemporary records and accounts of the 1916 Rising can be challenging. Many of the sources used to reconstruct the 1916 Rising and identify the participants and victims were compiled in the aftermath or the years and decades that followed. However, the Dublin Fire Brigade Ambulance Log is a contemporary record of the calls that came into the watch room at the Dublin Central Fire Station on Tara Street, providing a live account of outbreaks of fire and violence around the city during Easter Week. Importantly, the Log recorded details of the injured and deceased who were brought to hospitals from locations around the city.

The book is only 26 pages long and commences at 10am on 24th April 1916. The last entry is 10pm on Sunday 30th April 1916. It is a continuous record of the communications that passed through the new watch room, a hub of communication and alarms for the emergency services for the city of Dublin, which was part of the new central fire station and opened in 1907.

The Dublin Fire Brigade purchased its first motor ambulance in 1914 and by the time of the 1916 Rising was in possession of three motor ambulances, all of which were set to work when the calls started coming in after midday on 24th April.

The first page of the log book demonstrates that everything is quiet until about 12.30pm. In the next hour about 9 calls for the ambulance were recorded from Stephen’s Green, North Earl Street, Dame Street, Merchant’s Quay and Benburb Street, among others. At 1.52pm the ambulance returned and reported collecting five soldiers of the 5th Lancers from Charles Street, John Kelly of Rathfarnham from Abbey Street and one soldier of the 5th Lancers from Sackville Street. Four of the soldiers from the 5th Lancers were dead, two of the soldiers were wounded and John Kelly was wounded in the ‘Stomack’. They were all left at Jervis Street Hospital. Three minutes later another ambulance returned and reported collecting Alexandra Wilson and James Hoare from North Earl Street and delivered them to Jervis Street Hospital. Alexandra Wilson from 23 North Brook Avenue was 18 years of age suffering from a bruised shoulder after being struck by a rifle and James Hoare of 25 North Cumberland Street was only 13 years of age. He cut his nose when plate glass fell on him.

Who Appears in the Dublin Fire Brigade Ambulance Log

The log recorded the name, age and address of the patient, the details of their condition and where they were collected and the hospital where they were deposited. However, in many cases the names of the deceased or unconscious patients were unknown and the bodies were described simply as ‘male’ or ‘female’ with a suggestion as to their age.

This log book is not only a record of the dead and injured attended to by the ambulance service, but also a record of what was happening in the city. At 3.58pm a call was received from the Ordnance Department at Island Bridge reporting a fire in the Magazine Fort in Phoenix Park. One minute later the motor left to attend the fire but returned at 4.06pm because the street was barricaded at Church Street Bridge and the Volunteers who held the bridge refused to let the Fire Brigade pass.

As the week progressed the city became more and more dangerous for the fire brigade, with presumably barricaded streets making it difficult or impossible to reach certain areas. The log book is a record of the calls that came in reporting fire or requesting an ambulance with ‘didn’t attend’ written below. Lieutenant Myers, second in command of the Tara Street Station, forbade the fire brigade and ambulance from attending within the area of the Rising because it was too dangerous.

The log book is fascinating reading and is a small but valuable record of members of the public and British soldiers who were assisted by the Fire Brigade Ambulance Service during the 1916 Rising. The Volunteers did not use the ambulance service because each Volunteer garrison had its own compliment of nurses. However, the log book still identifies a small number of Volunteers and it is impossible to say how ‘active’ some of the wounded civilians might actually have been. If you are looking for an ancestor who might have been wounded or killed during the 1916 Rising it would certainly be worth spending half an hour browsing this source for a possible reference. This source conveys the urgency brought by an avalanche of calls for emergency services from all over the city and the frantic collection of bodies of wounded and dead to be deposited at the hospitals around Dublin. 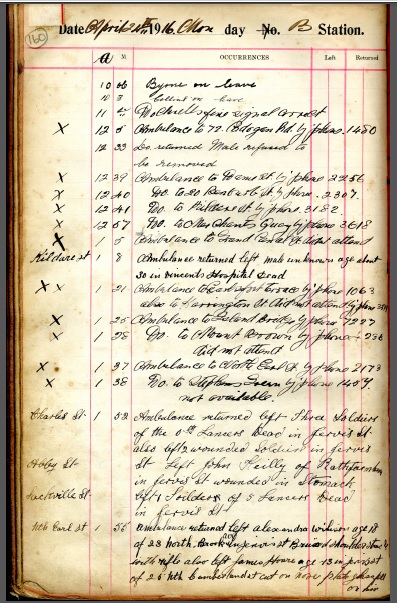 This is the story of one such Dubliner who was injured on 24th April.  Mabel McGlynn was born Mabel Constance Glynn in Dublin in 1892 the daughter of John Glynn and Alice Jane Gilmore. She had siblings; Mary and Sylvester and half siblings from her father’s first marriage; John, Jim, Peter and Denis. On 19th December 1899, when Mabel was 7 years of age, her mother died in the North Dublin Union Workhouse. At the time of the 1901 census the Glynn family were residing at Charlemont Mall and Mabel was attending school. Her father, John, a plasterer, bricklayer and building contractor died in 1906. By 1911 Mabel is residing at Brighton Gardens in Terenure with her older half siblings, James, Peter and Elizabeth and her younger brother Sylvester Thomas. Her brothers were all described as plasterers, their father’s trade. Mabel’s occupation was described as ‘photography’.

On 24th April 1916 at 9.14pm a William Carey called for the Dublin Fire Brigade Ambulance to go to Stephen’s Green West. William Carey is believed to have been a servant of the Church of Ireland Bishop of Dublin James Peacock, who resided at 16 Stephen’s Green, possibly a household with a telephone.  At 9.48pm the ambulance returned, having collected Mabel McGlynn from Stephen’s Green she was suffering from a bullet wound in the left leg.  According to her family she was shot on or near the steps of the Unitarian Church.  She was described as 26 years of age and residing at 20 Home Villas in Donnybrook. The ambulance brought her to 35 Rathmines Road. Mabel McGlynn described herself as a photographer on her 1911 census return. Is it possible that she was in the Stephen’s Green area taking photographs of the uprising, although it would have been dark by 9pm, when she was shot.   She was brought to 35 Rathmines Road, which, according to Thoms Dublin Directory was the location of James J. O’Rourke Urban Electric Company, but may have also been a dwelling house.  Mabel was very likely involved in the uprising.   According to her grandson, Mabel’s half brother, John McGlynn fought with Eamonn Ceannt in Jacob’s Biscut Factory.  He was interned at Frongoch after the Rising and during the War of Independence, Mabel’s home at Donnybrook was raided by the ‘Black and Tans’ twice.

The Dublin Fire Brigade Ambulance Log does not explain why Mabel McGlynn was brought to what appears to be a private dwelling. However, heavy fire at Stephen’s Green may have prevented the ambulance from getting to Mercers Hospital. In the same hour the ambulance collected three other patients, Mrs. Fleming and Mrs. Smithwick, who were also caught up in gunfire at Stephen’s Green as they returned from the Fairyhouse races and a 27 year old Lieut. Blake, who was collected from the Dolphin Hotel. These three were brought to 33 Fitzwilliam Square. It is quite possible that Mercers Hospital was over run or inaccessible at this time.

The Injured Who Appear in the Dublin Fire Brigade Ambulance Log

The following is a list of those whose names were recorded in the log book after being transported by the Dublin Fire Brigade Ambulance during Easter Week. They are listed as their names appear in the log book. Each entry records the time when the report was entered and the location, in most cases, where the injured was found. The name, age and address of the injured party, the hospital to which they were taken and a description of their wounds. I have expanded the short hand addresses and in some cases reformatted the entry for consistency. A digital image of the original entry from the Dublin Fire Brigade Ambulance Log can be viewed online.

Geraghty, Tom and Whitehead, Trevor, The Dublin Fire Brigade: A history of the brigade, the fires and the emergencies Dublin City Council 2004